How {And Why} To Adopt A Daily Tidy Up Routine

If you want to keep your home clean and free of clutter and mess, you need to adopt a daily tidy up routine. Find out how to do it here. 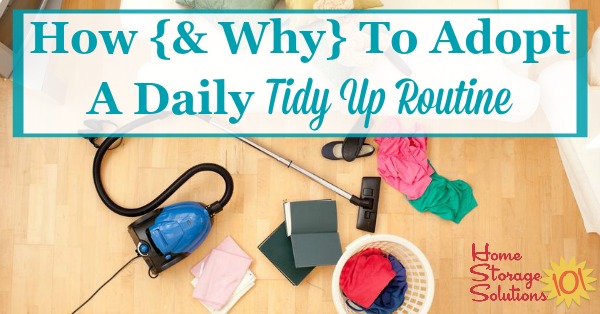 Today's Declutter 365 mission is to adopt a routine to do a daily tidy up of your house, starting today, and then do it consistently from now on.

I've made this mission fall during the week of the Declutter 365 missions when we're focused on creating a house cleaning schedule you can stick with in your home, because tidying is obviously part of keeping your house clean.

In fact, this tidying up routine is one of the activities I call the "Core 5" of the daily cleaning checklist, a series of cleaning tasks I suggest need to be done daily. Further, this routine is also one of my essential household chores that I don't think you should skip even when you're in suurvival mode, because life is very crazy or busy.

That's why I've added the task of creating this routine for tidying as its own day within the Declutter 365 calendar, because it is one of the most important routines you can adopt that will keep your home clean and clutter free from now on. 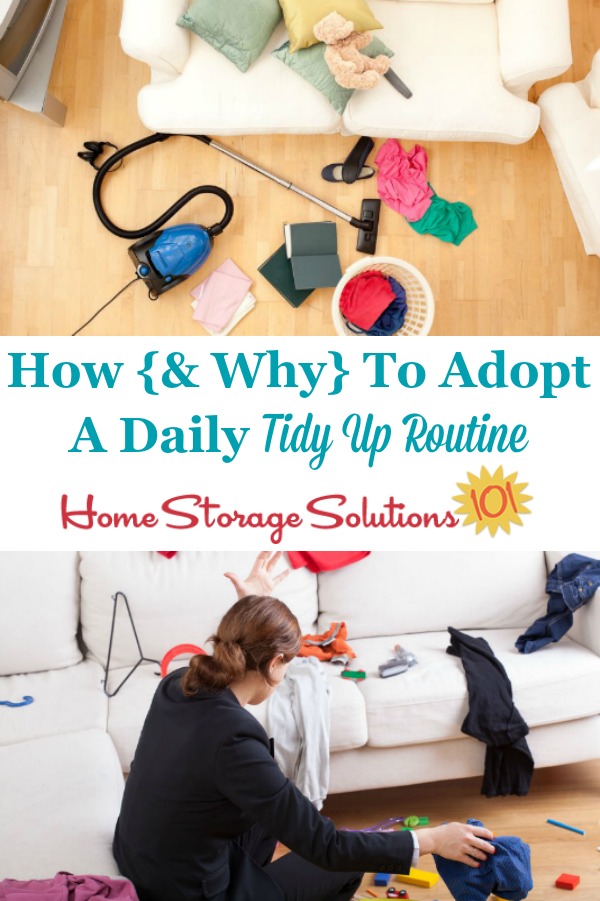 What Is The Difference Between Tidying & Decluttering?

To help you understand why tidying up your home daily and consistently is such an important habit, it will help for you to understand what I mean by the term, and how it differs from decluttering.

When I ask you to "declutter" an area of your home what I'm asking you to do is to look at the objects in that area, such as a drawer, and remove from that space, such as the drawer, any items that don't belong in your home, at all, and physically remove them from your home completely by donating, selling, or trashing (or recycling) them.

On the other hand, the term "tidy up" means to put the item back, into its designated spot, or to put it away. That means, for example, if you find something in the drawer that you do want to keep, and its not clutter, but it belongs on a shelf instead of in that drawer, you'd tidy up the drawer by removing that object and putting it back where it actually belongs in your home.

Therefore, the key distinction between decluttering and tidying is that when you declutter an object it is removed from your home, and if you tidy up an object you put it back into its designated spot, keeping it in your home for use again later.

When used in tandem, decluttering and tidying up work together to give you the home you desire, because decluttering clears away the junk and tidying keeps it from getting re-cluttered and turning into disarray again.

The easiest way to show how these two practices work together is to give you an example.

One of the first Declutter 365 missions on the calendar each year is to declutter your kitchen counters.

Each year, when I run that mission in January, I inevitably hear from someone who says, "I can't clear off my kitchen counters once a year and expect them to stay that way!"

My response is, "of course you can't! I agree!" Can you imagine keeping clear counters, or any flat surface, all year without any maintenance work on it? No, it would be a disaster.

Instead, you've got to get in the habit, once you've cleared off the clutter from your counters, to make a regular and continuous practice of re-clearing those counters off from now on, so it never returns to that extremely cluttered state, and that each time you clear it off it doesn't take nearly as long as that first time did.

As you re-clear off the kitchen counters day by day, most of the time the stuff that lands on them does have a real home. The mail will go one place, the kitchen utensil another, and the dishes in another. You wouldn't actually declutter those things (i.e., remove them from your home), but instead you'll spend time putting those items away! In other words, you'll tidy them up.

So the daily decluttering missions removes the clutter from your home that you should never deal with again, and then the daily tidying routine maintains that area's clutter free status, by putting away the things that have been pulled out, but need to be put back away.

Once you develop both the habit of decluttering, and the habit of tidying up daily, your home will become clutter free and then stay that way. It's really amazing how well the two practices work together!

What To Do In Your Daily Tidy Up Routine

Tidying up is really as simple as it sounds, and if you do it regularly I've found it also takes a lot less time than you might imagine.

When you're working on tidying you're not really cleaning, as in you aren't washing, scrubbing, dusting or vacuuming anything, but instead are just picking up stuff off the floor, flat surfaces, etc., and putting the items back away in their designated storage spots wherever they go in your home.

Focus On Tidying One Room At A Time

To keep yourself from going in circles, and not finishing any room completely, focus on tidying up one room at a time. Completely tidy that room before starting on the next room.

If you can put the items away in that room you find them in, then do so immediately. If, on the other hand, you find items in that room that need to be put away elsewhere, in a different room, wait until the end of tidying up that particular room to take those things back to other rooms in the home. Put away all the items from one room before you start tidying a completely different room.

Tidy The Most Trafficked Or Used Rooms First

When deciding which room to start with, I find it easiest and most effective to tidy up the most used and trafficked rooms first, since this is where most of the tidying needs to occur anyway.

For example, in my home, one of the first rooms we always tidy up as a family is our living room, since that is where most of us congregate together in the evening to watch TV, listen to music, read books, do homework, play games, or chat with one another or friends that have come over.

All that activity means there's more stuff pulled out and left in that room than many of the others, so if we tidy up that room first, then most of the work is done.

Common rooms, used by many in the household are prime areas to tidy first.

If a room is only used by one or two people, such as a bedroom, those people can be in charge of tidying that room (assuming they're old enough or able to do so without assistance.)

How Long Will This Tidying Up Take?

I suggest that, at a minimum, everyone adopt a routine of a ten minute tidying session each evening, as part of an evening routine.

Of course, it varies for each household how long it will take to tidy up the whole house, depending on factors such as how many people live in your home, the household member's ages and ability to clean up after themselves as they go, how many hours of the day they're at home versus outside the home, and the size of the house itself.

If you find that consistently, even after many days of doing your "ten minute tidy" in the evenings that you're still not done after ten minutes has elapsed, perhaps because of your circumstances, you need to adopt a routine of not just one daily tidying session, but a few, spread out across the day.

For example, if you or other members of your family are at home all day, and especially if you've got young children, you might develop a routine to tidying up the house at set intervals, like after breakfast, after lunch, and again some time in the evening. Each session should take ten minutes or less to do, and when done consistently will keep the house in relatively good order most of the time.

I will caution that if you haven't been in the habit of tidying your home at all, the first several times you do one of these tidying sessions you can't reasonably expect it will take just ten minutes. After all, you're not just putting away stuff from the past day, but instead are having to put away stuff that has accumulated perhaps over days or weeks.

You'll be amazed though, that if you are consistent with the ten minute tidy, and do it day after day, that very soon those longer tidying sessions will stop taking so long, and that instead they'll start to, perhaps, take less than ten minutes to complete everything!

Get All Household Members Involved

As I've discussed these daily tidying sessions I know I've been discussing "you" adopting the habit, but remember that if you're not the only person living in your home there's no reason that "you" should be the only one cleaning it up.

Instead, ten minute tidies are a wonderful habit for everyone in your household to adopt, either doing them together or separately.

In fact, the more people that participate in the tidy up sessions the quicker it goes, so I encourage you to get your kids, your partner, your roommates, or other members of the household involved in the process with you. When my kids were young, and still to this day, when a room starts to feel out of control or it's getting close to bed, I announce the ten minute tidy, and everyone gets to work, together, to clean it up.

Even very small children can participate in ten minute tidies, putting away toys, clothes, towels, laundry, dishes, and whatever else has gotten pulled out for use in your home over the last day, so it can be found again when needed, and doesn't cause you to trip, or otherwise be inconvenienced by it being out in the mean time.

Use today's mission to make sure you pass on this skill of tidying up after yourself to everyone in your household! It will serve them well all their life. 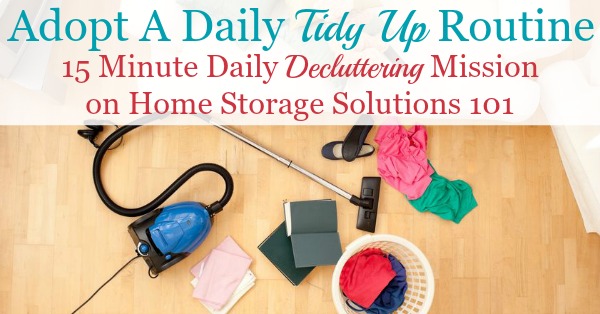 I hope today's mission has inspired you to take some simple steps to keep up with tidying up items throughout your home.

When you begin to get your home clean and organized the feeling you get is contagious, so if you're loving the results you're getting I would encourage you to keep going.

And as I mentioned, "tidying" is one of the core 5 cleaning tasks that I suggest you do daily in your home. Here's the article about setting up your daily cleaning checklist for more details of the other parts of the core 5. 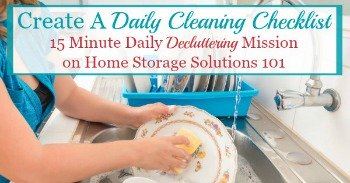 How To Get Rid Of Cleaning Clutter Hall Of Fame