Today's decluttering mission is to clean and declutter under the couch and in between the couch cushions.

This mission is designed to be done during the week we're working on the Organizing Living Room & Family Room Challenge, which is part of the 52 Week Organized Home Challenge here on the site.

Of course, you can do this mission whenever you feel like it, and definitely I suggest more than once a year! This is just the day I've got it scheduled on the Declutter 365 calendar.

I'm sure you know how quickly little stuff accumulates both under your sofa and also that slips between and under those couch cushions. Today's the day to brave it and get all that stuff out of there.

If you can move the couch (be careful not to hurt yourself) go ahead and do so, remove all the stuff under there and vacuum or sweep.

Then, remove the couch cushions (if you can with your couch) and really clean it out, including removing any stuff you find and vacuuming up crumbs and debris, including in the crevices. 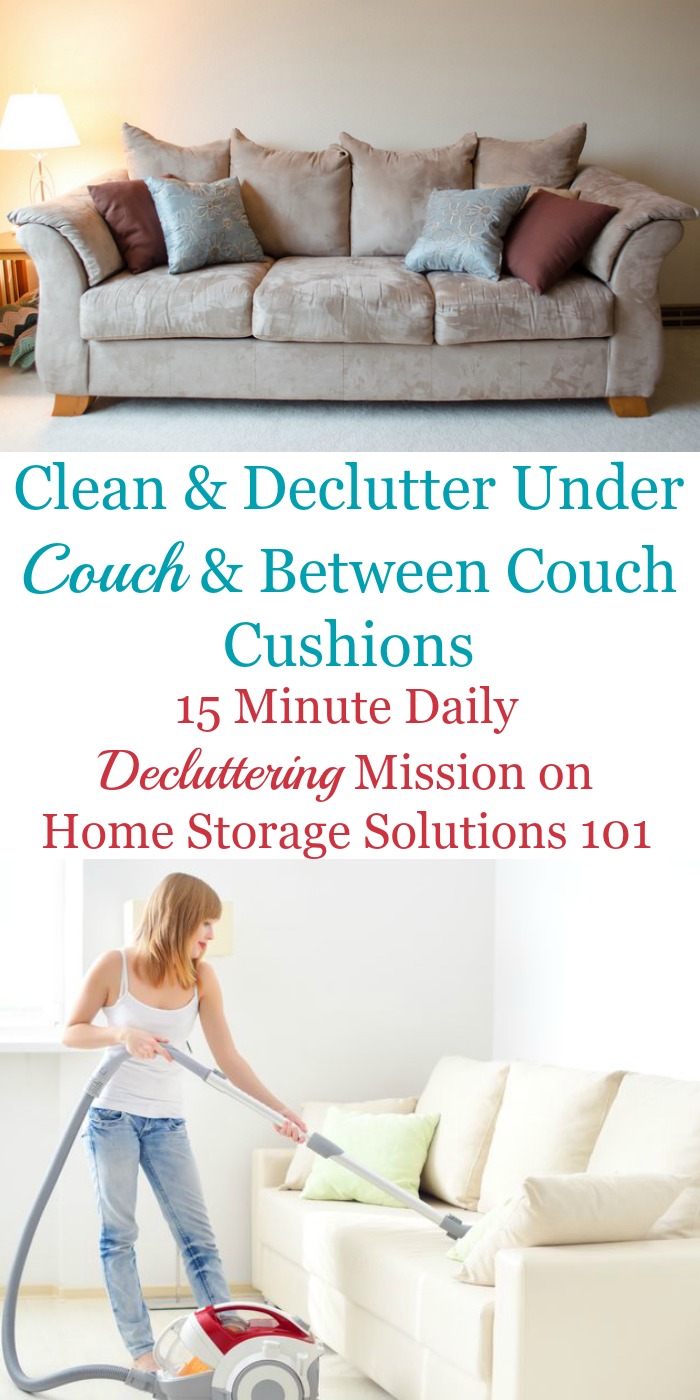 If you've got enough time go ahead and vacuum the actual cushions themselves as well. It removes a lot of dust and can keep your sofa or couch looking better longer.

Now, this is the type of mission that you can't just do once a year, but needs to be an ongoing task.

You'll need to decide how often to do it in your home, based on a lot of factors including how many people sit on the couch, and how prone everyone is to lose things in there.

I would suggest every week to two weeks though as a reasonable time.

Below I've shown some photos from readers who've done this mission, plus listed some of the most typical things you might find under your couch or between the cushions.

I'd also love to hear what you find when doing this mission too, so make sure to tell me in the comments! 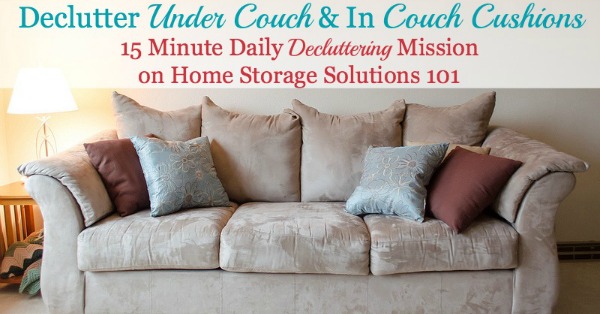 Join in and write your own page! It's easy to do. How? Simply click here to return to get rid of clutter.

Here are some photos sent in by readers who've done this mission. 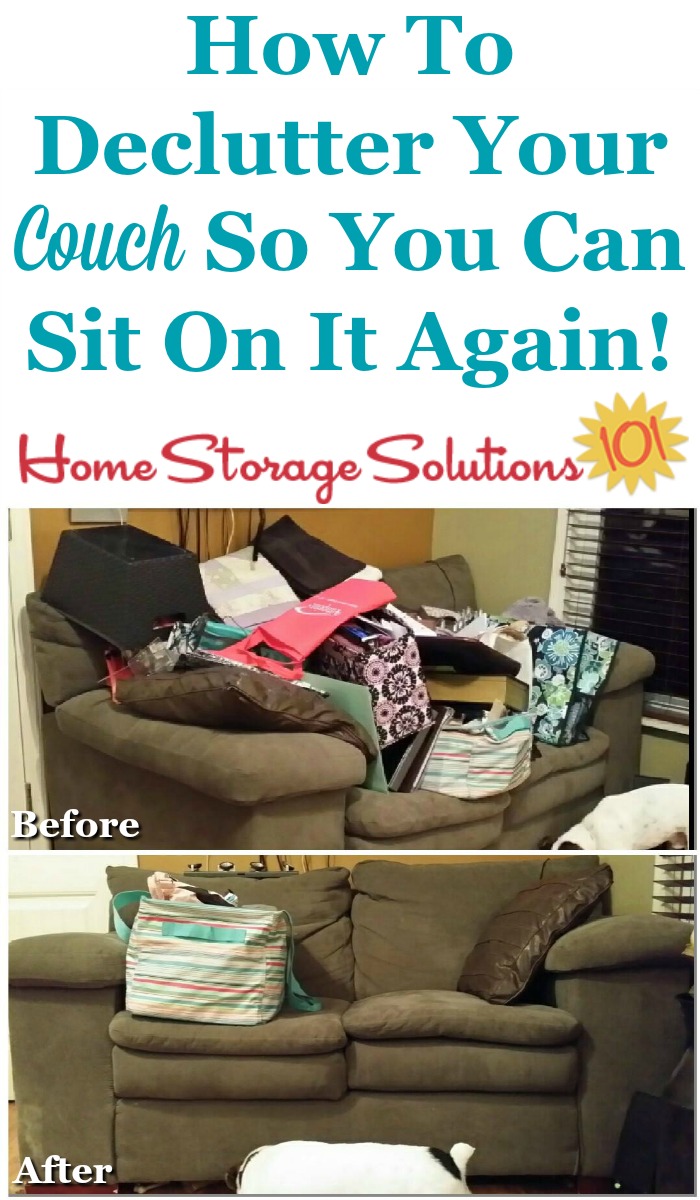 These photos above were sent in by a reader, Tamara, who needed to not only declutter underneath the couch and between the couch cushions, but actually to get rid of clutter on the couch itself.

If this is similar to you (and I'll be honest and raise my hand, this has been me in my home on many occasions), make sure you clear this clutter today as well.

There's no shame in the couch getting full of stuff from time to time. Sometimes we have laundry we need to fold and put away laying there, or you just put stuff down there when your hands are full. But clean it up now, so you can actually enjoy sitting on your couch! 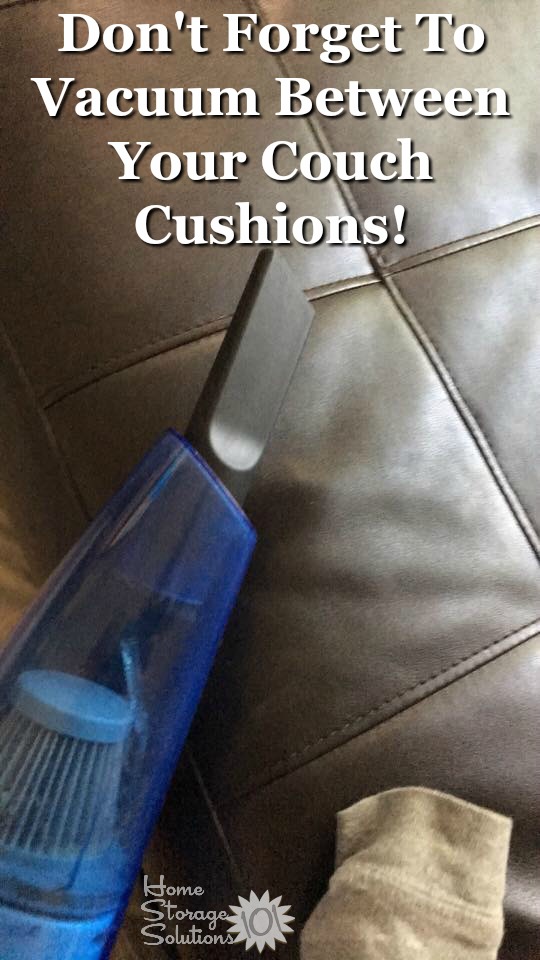 This photo was sent in by another reader, Chelsea. Make sure when doing the #Declutter365 missions regarding your couch that you vacuum underneath it, and in between and under the couch cushions! It'll make sitting on your couch a lot more pleasant!

Join in and write your own page! It's easy to do. How? Simply click here to return to get rid of clutter.

What Did You Find In Or Under Your Sofa? Once you've done this mission I'd love to hear what you found in or under your couch. Sometimes there is some crazy stuff you can find down there!

Based on reader responses from those who've already done this mission in the past here are some typical items that are often found in couch cushions or underneath the couch:


Tell me what you find in the comments!

I hope this mission has inspired you to get your home decluttered.

Getting Clutter Free 15 Minutes At A Time Hall Of Fame