If you want to go paperless in the kitchen why not try organizing recipes with Pinterest? Here's how to do it. 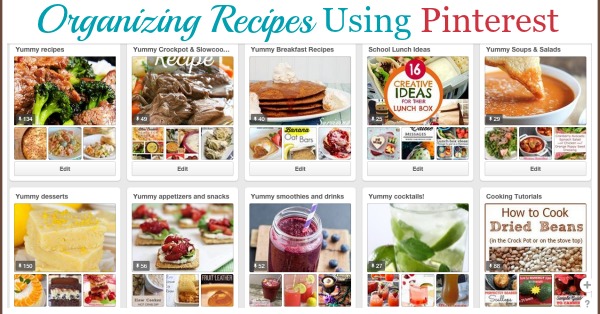 Pinterest Is The Modern Better Version Of Clipping Recipes From Magazines

For anyone who doesn't know, Pinterest is a social media platform where you can visually bookmark pages on the web that you'd like to read, reference again, or when you just really like a pretty picture and want to see it again.

It is like a modern version of pulling pages out of a magazine to see again later. But it is way better, for several reasons I'll explain below.

So if you're a magazine clipper, this may be just the solution for you, because Pinterest is designed to appeal to your personality and natural tendencies, but it can help you control all that paper and recipe clutter that is currently accumulating in your home. 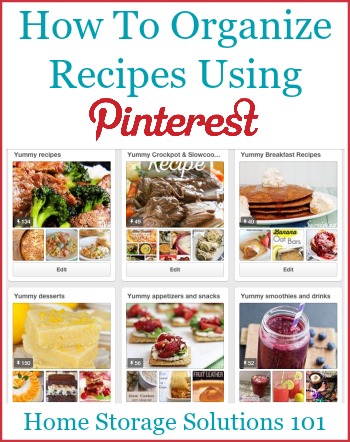 So it used to be that you'd see a recipe in a magazine that looked wonderful, and you'd pull it out to try later. Then, if you were organized you'd put it into an organizational system and eventually try it.

Or what unfortunately happened with this system for many people was that you'd put the pulled recipe into a pile with a bunch more recipes you wanted to try, and eventually you'd just dump them all because there was no way you could try that many new recipes and you couldn't find anything anyway and it had all become overwhelming.

Well, Pinterest is like the modern day, paperless version of magazine clipping. It has several built in features that, when you set it up correctly at the start, can help force you to do a bit of organization as you go and make it far superior to juggling all those loose paper recipes you've got lying around right now.

As with any organizational system there are pros and cons to using Pinterest for organizing your recipes. Nothing is absolutely perfect.

So here's the things you need to keep in mind before choosing to organize your recipes with Pinterest:

The biggest pros of this system are that it is paperless and free.

Anyone can create a Pinterest account with no credit card needed, and electronic clutter, while a real thing, sure doesn't take the same toll on you that physical paper clutter does.

In addition, with just a click of the pin button you can attach a picture of the recipe (and who doesn't actually eat first with their eyes!) with the source website it comes from.

And now, with what they call "rich pins," which many, but not all food websites have created code for, without even having to go to the website where the recipe is located you can see a list of ingredients the recipe calls for, making it great for meal planning as well.

Pinterest is also conveniently available both on your computer but also through the Pinterest app for your tablet or smart phone, so you can reference it wherever you are if needed.

The biggest con of using Pinterest for recipe organization is that it works well only for organizing recipes found on the web.

If you don't already find many of your recipes using the Internet, but instead almost exclusively cook from cookbooks, or old family recipes, there is no good way to integrate these recipes onto your Pinterest boards.

In addition, we've all experienced a blog going away, or even a page on the blog being deleted. If you loved a recipe, but then the blog quits or they change the URL of the page, then that recipe is lost to you.

If you're going to use Pinterest for organizing recipes, setting up a good system at the start is crucial.

The most important part of using Pinterest effectively for yourself is to set up good board categories. Having just one board called "recipes" is the digital equivalent of dumping all your magazine clippings into a pile on your kitchen counter and then hoping to find what you want one day in the future. No, it won't work.

Instead, think of each board that you create as a digital file folder. Yuck, you hate filing? Well, once those boards are set up, each time you decide to pin a recipe Pinterest automatically prompts you to choose a board, or file as we're referring to it here, to put it in. That forces you to organize your recipes as you go, and it is a blessing in disguise really.

So before you begin using Pinterest for recipe organization, or if you're ready to make better use of this tool, think about what categories you want to set up.

You can look at my boards here to get some ideas. You'll have to scroll down to find my recipe boards because I actually use Pinterest not just for my own personal enjoyment, but also for my business (this website and my other ones as well!), but it can give you an idea of what I'm talking about. (Oh, and I would absolutely love it if you followed me when you pop over if you like what you see!). 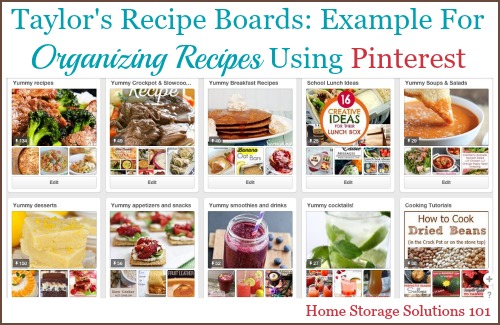 I've set up categories for many different types of recipes, with a more general category for dinners and sides, but then also boards for breakfast, school lunches, snacks and appetizers, soups and salads, desserts, smoothies and drinks, and even one for cocktails.

In fact, my general recipe board recently started to get unwieldy and I actually created another board, just for slow cooker and crockpot recipes, and moved recipes that fit that category over to that new board. I did that one night while watching TV with my husband, since it was easy and relaxing. I didn't actually have to move any pieces of paper around, which is a beautiful thing for anti-filers like I am (yes, I file, but paperless is just soooooo much better when I can do it!)

I also personally have a cooking tutorials board, where I've collected awesome tips for things that aren't recipes, necessarily, but are cooking techniques, or tips for preparing food, that are important for cooking in general.

Suggestions For Categories Of Boards To Create

There is no right or wrong number or type of categories when setting up your Pinterest boards. Instead, tailor it to fit your own personality.

However, much like a recipe binder or recipe box of old, there are some logical categories you might at least like to consider. You can check out my suggest recipe categories article here for the full list.

In addition, on Pinterest I've found that it is helpful to set up different boards for tried and true and favorite recipes, versus those you'd like to try in the future. That way, when you need something quick for dinner you aren't distracted by recipes that may look amazing, but you have no idea if your family will actually enjoy.

You can do this easily by creating a "tried and true recipes" board or something similar. The beauty of Pinterest boards, unlike paper, is that you can duplicate your pins, so the pin can be on both the board called, for example, "slow cooker recipes," and the board called "recipes family loves." You do this just by repinning the recipe onto the second board, after you've given in a try and love it. How simple!

Using Pinterest Features To Make It Work For You

Here's some ways to use Pinterest features to help you organize your recipes so that it works best for you:

Change Pin Descriptions To Provide Notes To Yourself

When you find recipes either on the Internet or on Pinterest itself often text is suggested to you for the description.

Try to make time before you pin it to edit that description, if necessary, to help remind yourself of your thought process while you're pinning it.

So, for example, if you find an awesome cake recipe, you may want to add to the pin description, "possible cake for hubby's birthday party."

Similarly, these pin descriptions aren't set in stone, but instead you can edit them later. That means if you tried it, but made a tweak to it, such as substituting one ingredient for another, or you want to remember your son absolutely loved it but your daughter wasn't a big fan, etc., go ahead and edit the description to add that information.

Remember, these are your pins. You aren't bound to the description suggested, and can change them anytime you want.

Delete Pins Of Recipes You Don't End Up Liking

On that note, about this being your tool to customize, don't feel obligated to keep all the recipes you've ever pinned on your boards.

We've all tried a recipe now and then and been disappointed. If you don't like it, it doesn't fit your dietary needs anymore, whatever, delete it!

Deleting is digital decluttering, and while digital clutter is easier to deal with in some ways then physical clutter, you still do need to prune your boards back now and then so you're just keeping the best of the best.

I already told you above how you can easily duplicate pins, so you can put them on more then one board. This can help you find things more easily.

You can also just shuffle pins around from one board to the next if you mis-file it, or just want to put it somewhere else later. You do this in the same place you change the pin description -- by editing the pin.

This is helpful if one of your boards becomes unwieldy, like I was telling you one of mine did. You can make another category board and then move all the relevant pins to it easily.

This is also the method you want to follow if you have already begun collecting recipes on Pinterest, but are now more determined to get them all organized better.

First make all the appropriate category boards, and then just move all the pins to the correct boards. Add better descriptions if necessary at the same time. Depending on how many pins you've got this may take a while, but it will help you actually find things, and you can use the opportunity to clean up your pins at the same time. Only move a pin if it is worthy of you actually cooking it in the future. Use this time to do some pin decluttering!

Finally, Pinterest has a pretty good search function. It is not perfect, I'll be honest. Sometimes I know I've pinned something and it doesn't show it to me and I manually have to go to the board and find it. But it can be helpful.

To use this feature to find your own pins just make sure when you do your search that you click the button that says "your pins" and it will only show you things you yourself pinned!

If your boards are very organized themselves you don't have to use the search feature, but it can be helpful if you're in a hurry or have accidentally mis-pinned something to an incorrect board.

So How Do You Organize Recipes?

I hope these tips will help you use the free tool of Pinterest for organizing recipes! I know I love using it and I hope you do too.

Of course, there are many ways to organize recipes beside with Pinterest. You can check out more ideas in the Organize Recipes & Cookbooks Challenge here.

Getting Rid Of Paper Clutter Hall Of Fame

Go From Organizing Recipes With Pinterest To Home Page