How To Fold Kitchen Towels: Best Way For Organization & Storage

Here's a simple tip for how to fold kitchen towels and dish cloths to make it easy to keep these items organized and neatly stored, either in a drawer, cabinet, or even on your kitchen counter. 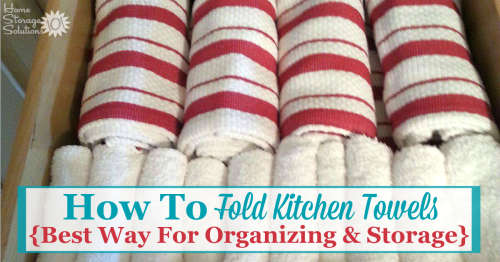 Kitchen towels and cloths are some of the most frequently used items in our kitchen, and you should be using a fresh clean one at least once a day, and many people like to switch them out even more frequently.

That means you need to have a relatively large quantity of towels ready and available for use, and that it's helpful for them to be easy to grab, easy to fold back up after laundering, and also easy to store for later use.

Instead of folding your dish cloths and kitchen towels, roll them. Once you do this it makes each one easier to grab, and they are also easier to place neatly in a drawer or wherever else you will store them. 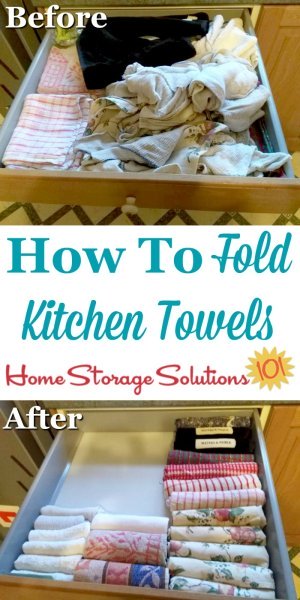 It's that easy! That's why I love this idea, it is simple and quick to implement for yourself.

These photos were sent in by a reader, Caroline, who both decluttered her kitchen towels, and then also changed the way she folded the rest of them she kept, rolling them up instead, to make a big difference in her kitchen drawer.

Store Your Dish Towels In A Drawer Or Basket

Once you fold your cloths and towels in this fashion it makes it easy to store them tidily in a drawer, such as shown above, and also as shown by these before and after photos sent in by another reader, Julina. She said, "I thought my dish towel/cloth drawer was pretty good until I saw other people's after pictures. Lol. So here are my before and after pics. P.S. It only took me five minutes. And I put three dish cloths into my rag bin." 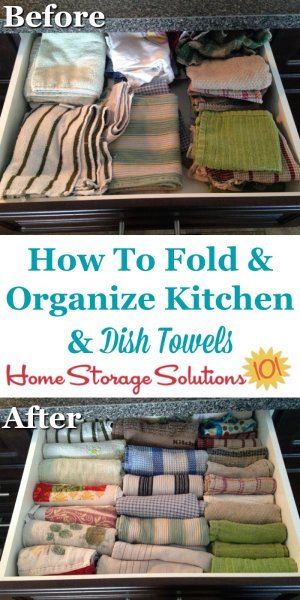 Not only does this folding technique work well inside a drawer, but it is also perfect for those who want to keep their kitchen cloths out for use, such as on their counters in a basket. Here's two photos from readers who've done exactly this.

The top basket photo was sent in by a reader, Marcia, who said, "I don’t keep mine in a drawer anymore. I just have a wicker basket on the sink back and have all of the towels folded pretty like that in the basket. I chose towels and wash cloths that match my decor color."

The bottom basket photo was sent in by another reader, Kelly, who said, "I do the same thing. So easy to grab a clean one every day and put away."

Like I said, this is an extremely simple idea, but that's what makes it great! You can see how simply changing the way you fold your kitchen towels and cloths can help you organize and store these often used items more easily in your own home. So give it a try, it won't take long!

I hope you enjoyed this simple idea for organizing kitchen towels and cloths.

There are even more ideas for storage and organizing on the site in the {A-Z} Storage Solutions & Ideas round up page. Go check it out if you'd like to see even more ideas.

In addition, if these ideas have inspired you to organize even more things in your kitchen make sure to read the Kitchen Cabinet & Drawer Organization Challenge, which is part of the 52 Week Organized Home Challenge I run on the site! 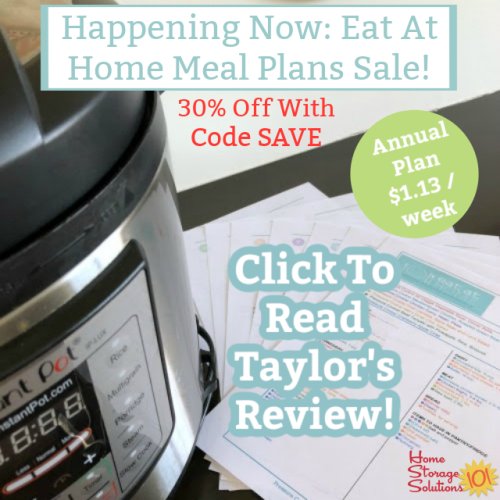 Go From How To Fold Kitchen Towels: Best Way For Organization & Storage To Home Page